The Saltire Awards started off by Rt First Minister Alex Salmond as the Millennium Awards. Soon after it was renamed as the Saltire Awards to acknowledge the recognition of the dedication and contribution of young people volunteering in Scotland. There are six categories of voluntary hours, the young people can do, 10, 25, 50, 100, 200 and 500.

Assistant Chief Officer Lewis Ramsay has had an interesting career in the Fire Service. Recently played an instrumental role in the Clutha Helicopter Crash and has been involved in the Evening Times’ Community Champion Awards previously.

It was a humbling day to witnessed the achievements of these young people today. Congratulations to them all on their awards and their well-deserved hard work.

Universities Scotland and Colleges Scotland teamed up together to host a one-off award ceremony that recognises and celebrates the many contributions that staff and students in Scotland’s further and higher education sectors are making to ensure that Glasgow 2014 is a fantastic success and will deliver an enduring legacy for Scotland’s people.

The unique event took place on Thursday 3 April 2014, at the Old Fruitmarket in Glasgow. 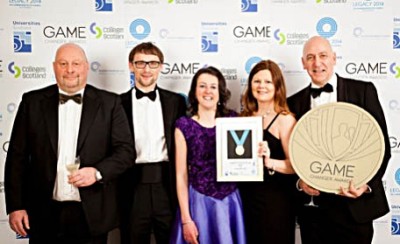 Our one was a finalist in the Research Impact Contribution alongside entries from University of Glasgow, as well as a collaboration between the Universities of Stirling, Dundee and Glasgow. This award category recognised the impact of research relevant to the Glasgow 2014 Games, its legacy goals and or to the enhancement of sport or understanding of the Commonwealth in Scotland.

I was thrilled to be part of the winning University of the West of Scotland Research team at the Game Changer Awards. It still hasn’t sunk in that my team has a GOLD award!

The Evening Times ParaSports movement of Glasgow 2014 has captured the debate beyond Glasgow, even further afield than Scotland to London and Developing Countries across the World.

I recently had the pleasure of meeting the Minister (MP) Lynne Featherstone, Parliamentary Under Secretary of State (PUSS) for International Development in March this year. Lynne is championing Disability Rights for those in developing countries. Within her portfolio sits Violence Against Women and the Disability portfolio.

One of the reasons why Lynne Featherstone, the Minister for the Department for International Development (DFID) was keen to visit Glasgow because many disabled athletes from developing countries from Commonwealth Countries will descend in Glasgow to complete in the Commonwealth Games. For many of them, they will embrace the celebratory atmosphere that the Commonwealth’s motion brings.

Lynne and I toured the Emirates Arena and Sir Chris Hoy Velodrome. We met Gordon McCormack who is currently employed as Senior Co-ordinator to Disabled Sports within Glasgow City Council and he is also Chair of Scottish Disability Sport and Johnathan Shaw, the General Manager of the Emirates Arena who talked about the unique building and the benefits to the citizens of Glasgow and beyond. Lynne was struck by how dedicated the organisers of Glasgow 2014 are to making sure the Games deliver for people with disabilities.

Glasgow 2014 will feature the biggest ever number of Para-Sport medal events in the history of the Commonwealth Games – 22 in total, spanning five sports. The Commonwealth Games offer a great opportunity to raise the profile of issues facing people living with disabilities both in the UK and across developing countries. The visit was an opportunity to see how preparations for the Games are progressing and to meet those with insights on improving access and equality for people living with disabilities.

Lynne also highlighted the pledged that any school construction supported directly by DFID allows disability access, when currently almost 90 per cent of children living with disabilities in Africa do not regularly attend schools. People with disabilities in Scotland must consider themselves fortunate to have access to education and technology to help them learn. Technology has been a lifeline to many including myself in developed countries. In stark contrast to when I visited the slum of Dehli a few years ago, it was heart-breaking seeing many disabled children couldn’t write despite being given one piece of paper.

Her visit coincide with another interesting landmark as it appears that disability was not specifically addressed in the Millennium Development Goals, UN initiative which conclude in 2015. Now there is a push to mark disability on the international agenda and recognise it in post-2015 development plans.

It was evident that Lynne and I shared the same passion for the ParaSports being endorsed in Glasgow. The Games will be a source of inspiration for people with disabilities not only in Glasgow, but across the world.

International Development Minster, Lynne Featherstone commented
“Campaigners like Julie McElroy are doing a great job in keeping disability issues on the agenda. The Evening Times deserves credit for giving people with disabilities a voice across the city. In the world’s poorest countries people with disabilities are often the most vulnerable, that is why the UK is pushing hard to put disability at the heart of the post Millennium Development Goals agenda.”